The only certainty about global energy is that the markets will continue to surprise in 2019.  The energy business has always been notorious for its ups and downs.  This is even more true today when the energy landscape is evolving rapidly.  The old order is changing fast as new trade routes emerge, driven by the resurgence of US energy production.

That said, there are a few key trends that emerged in 2018 that are likely to set the tone for the year ahead.

The United States was a net exporter of oil and refined products for one week in late November for the first time in 75 years.  The shale revolution has seen domestic U.S. crude oil production surge to around 11.7 million barrels per day.  Plentiful supplies of crude oil are also making U.S. refiners more competitive, encouraging them to boost output of refined products like gasoline, diesel and jet fuel.

This net export status is unlikely to be a regular occurrence in 2019.  But the U.S. is likely to continue its path towards energy independence, reshaping the global markets.  In 2016, 47 percent of the crude oil run in U.S. refineries was from abroad.  This fell to almost 41 percent during 2018 and could well ease lower still in 2019.

The U.S. is becoming an important supplier of crude oil to the world.  U.S. crude exports increased by more than 80 percent year-on-year, according to the latest EIA data.

This trend towards increased exports is likely to continue in 2019, boosted by infrastructure developments on the U.S. Gulf Coast and new market mechanisms such as CME Group’s WTI Houston Crude Oil Futures. 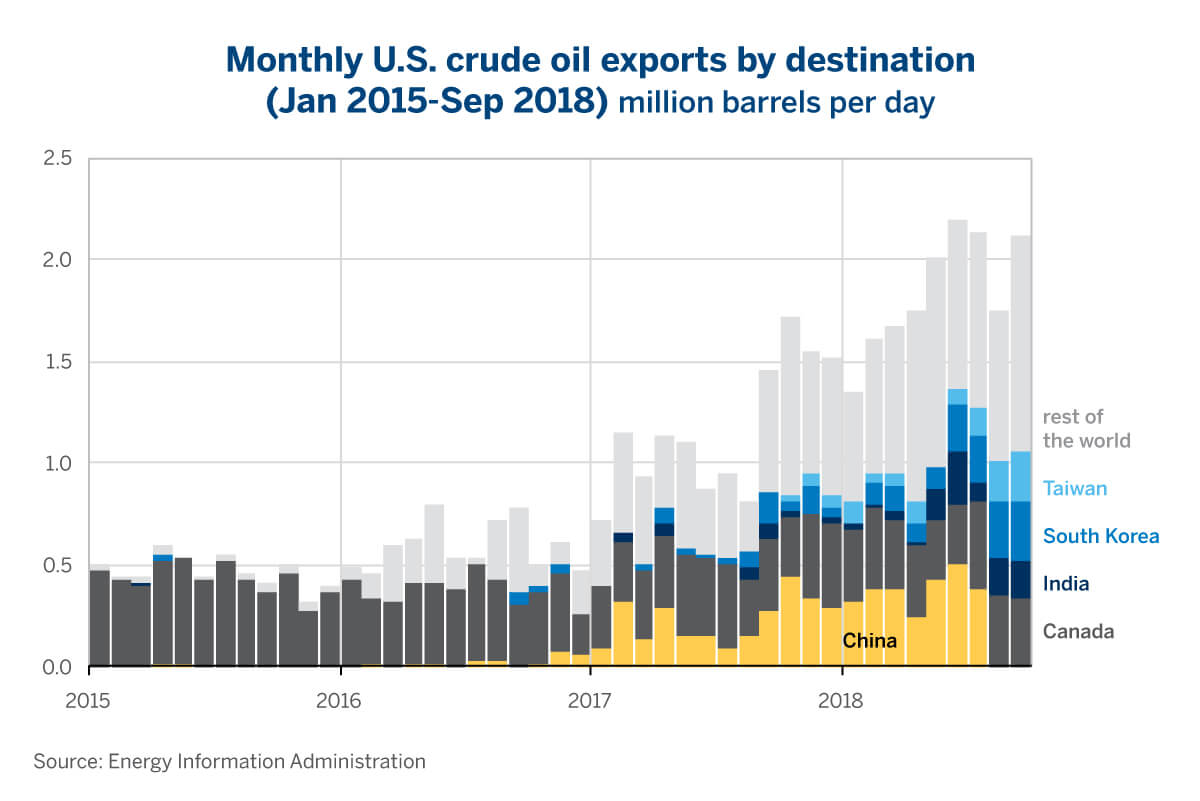 The new status of the U.S. as a major oil producer as well as consumer has changed the dynamics of the global market.  A presidential tweet can now move the oil markets up or down.  The U.S. has joined Saudi Arabia and Russia as the ‘big three’ most influential oil producers.

The drive to mitigate the potential impact of climate change is likely to intensify in 2019.  An obvious beneficiary is natural gas, particularly in the form of LNG, which is steadily displacing coal around the world.  A number of new U.S. LNG facilities will ramp up production in 2019, significantly increasing U.S. export capacity.

The year ahead will also see the final preparations for the International Maritime Organization (IMO) sulfur cap of 0.5 percent in 2020 for the global shipping industry.  This major regulatory change will require major changes by refiners and shipowners.  In 2019 we can expect to see the price relationships change between higher and lower sulfur refined products and crude oil.

Electric vehicles are likely to continue to capture headlines in 2019, but their impact on the energy markets will remain very limited.  Refined oil products will continue to dominate transport demand for the foreseeable future.

More important to the markets than a shift to electric vehicles will be the status of demand from expanding economies, with China the standout.  China imported a record 10.4 million barrels per day of crude oil in November. Any slowdown in Chinese demand in 2019 will have serious downside implications for the energy markets.

Trends, data and analysis can tell us something about what the year ahead might bring, but as is always the case in energy markets, there are significant uncertainties ahead.

The post What to Watch in Energy Markets in 2019 appeared first on OpenMarkets.

Source: CME Open Markets – What to Watch in Energy Markets in 2019

Will The Fed Cut Rates in July? Six Key Dates To Watch

Is There A Gold/Bitcoin Correlation?

We’re in A New Era of Market Data Sharing