On Thursday, May 16, I visited the CFTC Washington DC office for a meeting with Matt Kulkin, Director of the Division of Swap Dealer & Intermediary Oversight, and Tom Smith, Deputy Director, Managed Funds & Financial Requirements Branch of the Division, along with several division staff members. Prior to the meeting, I gathered information from NIBA FCM and IB members in order to have a focused agenda of current issues that concern our community. Many topics were covered in DC — those below are slated for follow-up with the Commission:

• Bulk Transfers: Most FCMs and several IBs feel that bulk transfers take too long as paperwork can be incomplete, or because one firm “drags its feet” getting the transfer done. Having a time certain from the time the transfer is initiated to the time it must be completed was suggested as a possible solution. I have also seen some interest in this subject from FIA.

• Whistleblower Program: Some FCMs and several IBs feel that the way CFTC whistleblower awards are announced is misleading and borders on “enticement.” It was suggested that the announcements and the qualifying documentation should more fully explain the average award amount, the time the investigation takes and the number of awards actually made versus the number applied for, so that an individual more clearly understands the possible “reward” for being a whistleblower.

• OCR: FCMs and IBs alike are complying with the program, but both groups wonder who is using the information collected, who is enforcing the program and whether the information is proving to be useful. Also discussed was the possible duplication of reported information.

• “Not all fines are alike:” Some fines/infractions of CFTC and other regulatory rules are minor — often a result of misunderstanding rather than of an intend to disobey. Since the public, including pension and other hedge funds, use a firm’s disciplinary history data as one criteria when deciding who to do business with, the type of infraction should be more clearly explained when reported. 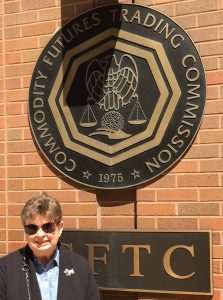 Contact me if you would like to discuss any of the above points further, or if you have suggestions or topics for future meetings with the CFTC. [email protected].

CME Fees–Snapshot of Who is Saying What Around the Industry